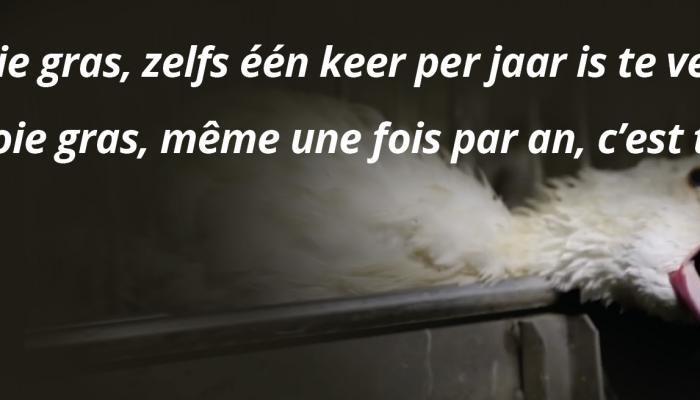 Because even once a year is already too much

The main Belgian television channels will broadcast from December 11th to 21st GAIA’s Christmas ad against the force-feeding of ducks for the production of foie gras. This year, the public will discover a montage of footage of animal suffering filmed in force-feeding sites. While the ad ironically suggests the warmth of Christmas festivities, it will certainly leave a bitter aftertaste. GAIA thereby hopes to encourage consumers to stop eating foie gras.

Foie gras is obtained by the cruel practice of force-feeding, which involves forcing ducks to ingest twice daily a corn mash, administered by pneumatic pump, and which causes severe discomfort and significant mortality rates in these birds. Belgium is among the five European countries still producing foie gras, where tens of thousands of ducks are force-fed every year. In France, the largest world producer, at least 40 million waterfowl, mostly ducks, but also geese, are force-fed each year.

Recently, the prestigious University of Cambridge in the United Kingdom published a scientific report which, at the request of GAIA, evaluates the consequences of foie gras production on the welfare of ducks. The report was conducted by Professor Donald M. Broom, world-renowned scientific authority on animal welfare. The report states that the current conditions of foie gras production would meet only three of the twelve criteria and no single principle of welfare provided by the European project Welfare Quality®, used to measure the well-being of farm animals. The obvious conclusion, according to GAIA, is that if one wishes to continue producing foie gras, it can be done without force-feeding.

GAIA reiterates its demand to ban force-feeding ducks in Belgium and encourages consumers to give up the habit of even occasionally eating foie gras obtained from force-feeding, even if it is offered to them. Because even once a year, during the holidays, is still too much, since it only perpetuates the cruel practice of force-feeding. Therefore, GAIA’s TV ad particularly targets those people who only occasionally consume foie gras, or when it is offered, as during the festive season.

GAIA also takes the opportunity to remind the public that there is an ethical alternative: Faux Gras® de GAIA, delicious and animal-friendly. This product is available in all Belgian supermarket chains, except for Aldi and Albert Heijn.

Learn more about the report of Cambridge University